Day : :Arrival 7:25 : our driver will pick you up from airport and transfer to hotel.

An early morning departure is necessary to get the first riding of the trip completed. Drive straight to Da Lat and cycle fantastic country lanes and back roads in the shadow of Langbian mountain.The roads will be virtually traffic less, and it is a great way to get the feel of cycling in Vietnam. Dalat was established as a hill resort at the beginning of th last century by homesick French colonials who were attracted to its cool, spring- like weather, pine forests,water falls and lakes. Many reminders of Dalat’scolonial past can be seen in the hundreds of European style villas,chalets and other buildings still standing around town.One fine example is the cream-colored art deco villa that was onec the summer home of vietnam’s last emperor,BAO DAI.Another slightly grander example of Dalat’s colonial architecture is the superbly restored Dalat Palace Hotel overlooking the central Xuan Huong lake.On the opposite side of Xuan Huong Lake is Vietnam first golf course,originally built for Emperor Bao Dai and recently restored,it is nowone of the top coursesin the region.Aprt from its colonial heritage Dalat is known in Vietnam for it market gardens growing,everthing from carrots and cauliflowers to avacados and bananas as well as many varieties of flowers.For Vietnamese Dalat means romance,and with attractions like the valley of love it is the destination for choice for local honeymooners.A few kms from Dalat,at the base of Mount Langbian is the village of the Lat ethnic minority from whon Dalat takes its name.The Rugged country around MountLang offers some great off road and on road biking opportunities.From Dalat the fertile plateau of the Central High land stretches northwards for hundreds of kilometers 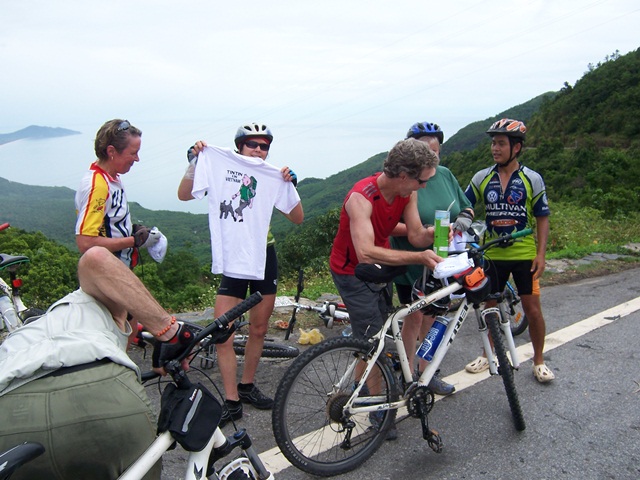 Today’s the ride is predominantly downhill through pine forests ,villages and tea plantations as we descend nearly 1500m from Dalat to the Po Klong Galai Cham Tower,near the coastal town of Phan Rang.these four brick towers a among someof the best-preserved in Vietnam;they were built in the 13th century,during the regiem of the Cham monorch Java Simhavarman III ,as Shiva temples(Hindu).Aftervisitingthe temples we drive to Nha Trang in the afternoon.overnight in Nha Trang.Vistit:Ponagar temple. 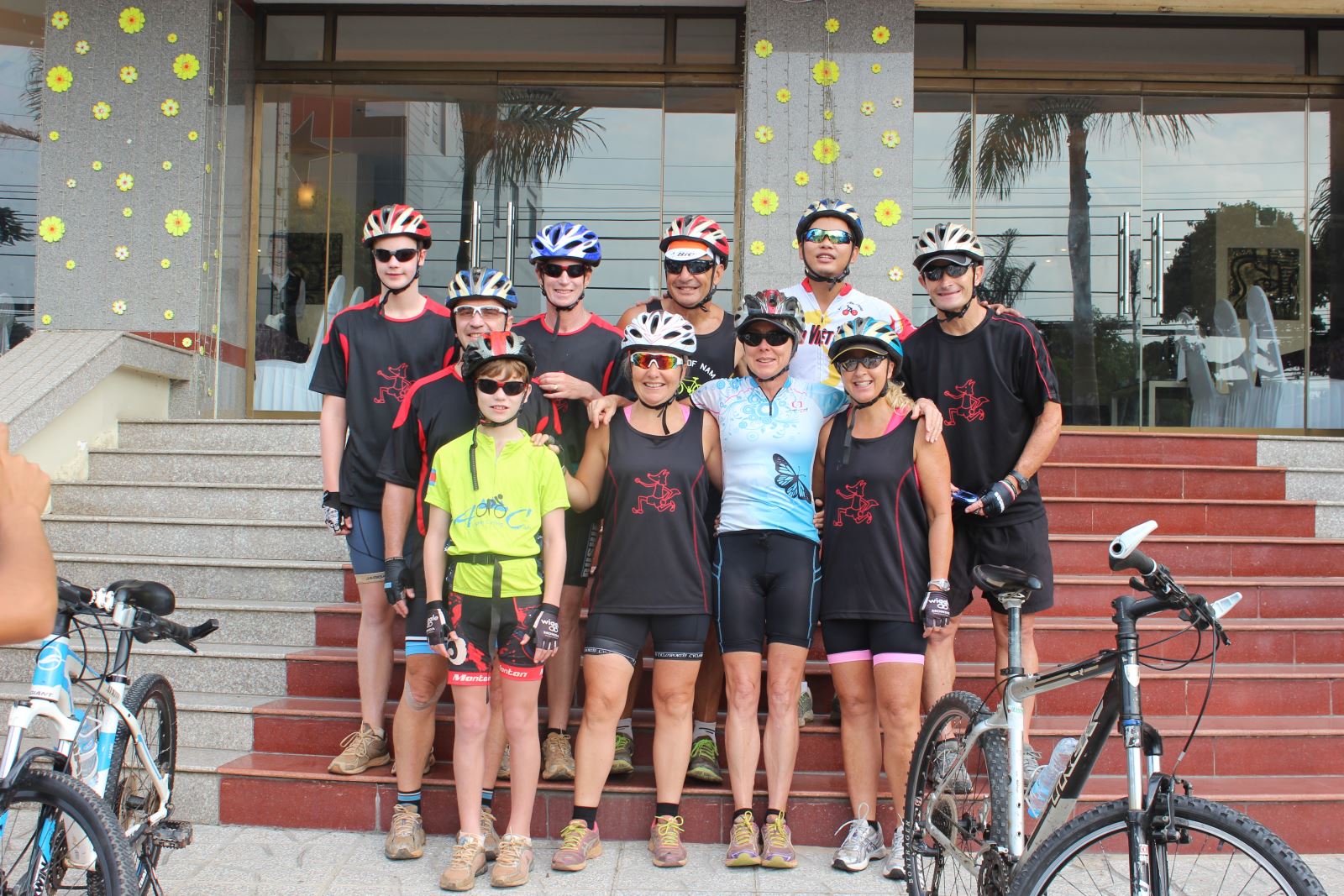 Avoiding cycling on H1 we drive in the morning to the HON GOM penisular,some 80km north of Nha Trang.Unloading the bikes we ride a short way past shrimp farms out along the penisular.Board a 15minutes boat to Whale island,an eco resort owned by a Frenchman and his Vietnamese wife.The island is small but there are plenty of optional activities to do such as catamaran sailing,snorkeling.relaxing,hiking the short nature trail around the island,and diving.The food is a fusion of French and Viet cuisine.Overnight in simple but very comfortable bungalows of Whale island. 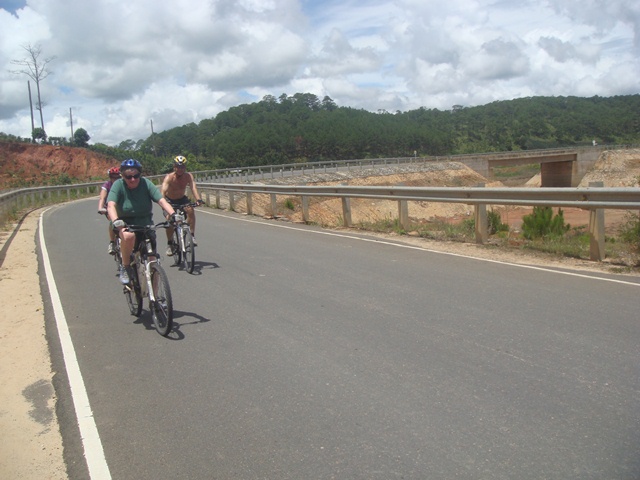 After a leisurely morning on the island,return to the main road and drive northwards a short distance to a void the main traffice,Cycl back roads to the coastal town of friendly people along the journey.Overnight in QuiNhon. 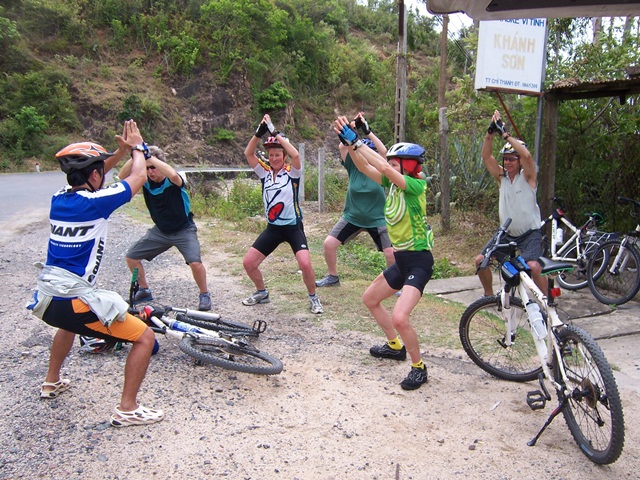 After breakfast continue the journey along Vietnam’s only coastal road,to our next biking spot,near the Quang Ngai town.Here we unload at the comfortable hotel and take lunch before a wonderful afternoon ride again on quiet country roads,The ride starts with a short steady 2 km climb to the top of Thien An Mountain where we enjoy the panaromic view of the surrounding countryside and visit an ancient working pagoda.From here we ride to the site of the My Lai massacre ,now a shrine and memorial museum dedicated to the families who lost their lives.After a guide tour around the site and museum we continue on quiet roads to the beach for a chance to swim and relax,then continue looping round through fishing villages back to the hotel.overnight in Quang ngai.

After breakfast drive a couple of hours to Hoi An,a living museum,once known as Faifo,Hoi An was one of the orient’s major trading ports in the 16th-17th centuries.After the Thu Bon river linking Hoi An to the sea silted up,ocean going ships were no longer able to sail into town and trade moved 30km up the coast to Tourane(Da nang today).Despite the pass 200 years and the ravages of weather and war,the centre of Hoi An remains much the same as it was in its heyday.A walking tour is the best way to see the wooden –fronted houses that onece belonged to the town’sprosperous merchants,the Japanese-covered Bridge and the wonderful market.Hoi An is one of the best places in Vietnam to shop for souvenirs at bargain prices including silk,handicrafts,antiques and paintings.

Five kilometers from the centre of the town is Cua Dai beach,popular with both locals and visitors alike for its sandy beach,warm sea seafood stalls.Hoi An isknown throughout Vietnam for its excellent seafood and it also boasts its own unique dishes such as Cao Lau,a delicious combination of noodles,port bean sprouts,mint and croutons.

The day is at leisure.alternatively take a bike ride to My Son Cham Tower located 70km from Hoi An or charter a local boatout to the beautiful Cham island set in spristine seas and with a gorgeous deserted beach..few tourists have yet visited this gem!

Today we turn north again for the cycle to Hue(the rout passes over the spectacular Hai Van pass(pass of the ocean clouds),have lunch in Lang Co Beach,and enjoy the amazing ride along the penisular all the way to Hue.overnight in Hue.

Hue is o-ne of the main cultural,religious and educational centres of Vietnam.Hue become the nation’scapital under the Nguyen Dynasty when  Emperor Gial Long,the first ogthe Nguyen Emperors,chose the location for the imperial city 1802.The city remained vietnam’s capital until 1945,when Bao Dai,the last of the Nguyen Emperors,abbicated.Many of Hue’s attractions are found along the banks of the romantically named Perfume river that flows through the centre town.on the north part of the Imperail is the Citadel,built in along the line of Peking’s Forbidden City,enclosed by 10mete thick walls and surrounded by a moat.A few kilometers futher up the river perhaps Hue’s best-masusoleums of the Ngyuen Emperors,more like palaces than tombs,are scattered around the rural areas surrounding the city .The mausoleums of Emperor Tu Duc,Khai Dinh are particulary impressive being extravagant complexes of pavilions,temples,courtyards and lakes.Hue is also the enormous producing the Non La or conical hats in Vietnam and the places to buy these is at the enormous Dong Ba Market.

Spend the morning cycling to some of these top sights,having lunch in town.In the afternoon board  to Hanoi.

join by cyclo tour around Old Quarter, The tour will visit the Of , ’s first university. Constructed in 1070, the gardens and well-preserved architecture offer a relaxing glimpse into ’s past.Having a walking tour in the old quarter to experience the thousand year old town.over night in Ha Noi.